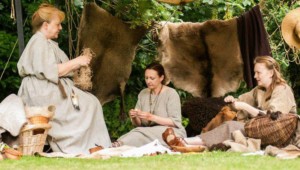 News and announcements from the GM and resources for players. Please choose from the drop down box.

Y Saith were all agreed.
Despite the possible dangers, the Gwerin Coch would travel south.
The confirmation that Aur Du could be found in abdundance outweighed the reports of an unknown tribe nearby.
The scouts were confident that there were more than enough outcrops for the area to be shared and given that no attempts had been made to drive them away, it was unlikely there would be conflict.

Dilwen would lead the Gofaint Glowyr to the location whilst Olwen would find grazing for the Heidwaid Anifeiliad to the northeast with Rhonwen with the Gasglwyr Helwyr hunting in the jungle between them.
The Fflrwyr, led by Heulwen, would continue to explore the mountains to the north for a source of ore.
The information they had provided was keeping Meinwen, Gwenthurwr Mapiau, busy.
Copies of the maps she had produced would be given as a gift to the unknown tribe to indicate the peaceful intentions of the Gwerin Coch.